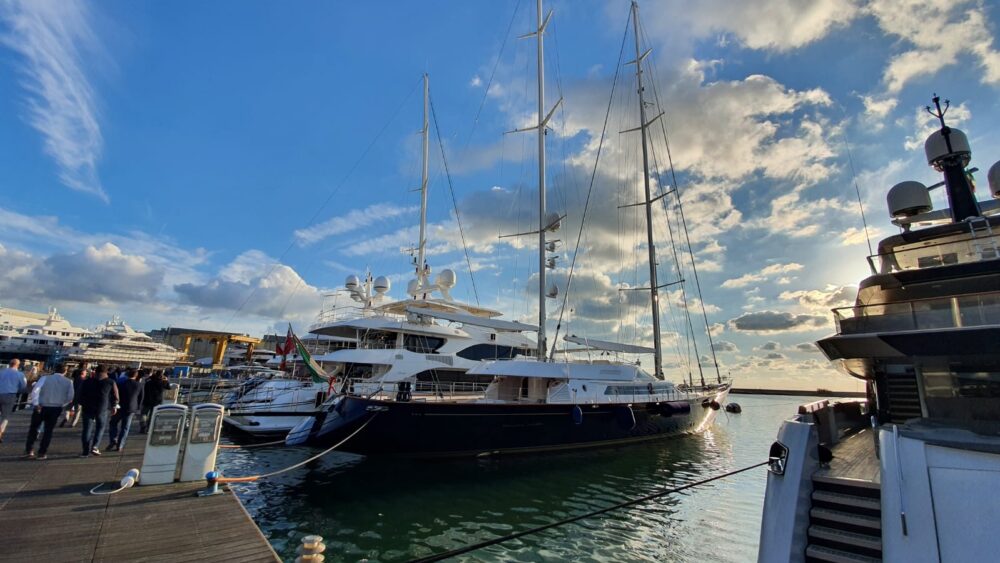 After landing in Pisa, a VIP transfer bus collected them and took to the Seven Stars Shipyard where they were shown around the facility, given a presentation surrounding the future of the shipyard and Leopard Yachts recent improvements. Held all outside or within the shipyards working sheds, there was plenty of space for social distancing and mingling with colleagues whilst enjoying a delicious Italian style lunch laid on by the shipyard.

After lunch they headed to the Rolls Royce MTU factory in La Spezia where they received a presentation on the latest technologies and how they were developing to stay inline or ahead of their competition.

The last stop of day 1 was the Lusben Marina and Shipyard in Viareggio which showed an impressive selection of manufacturers based in one location for refit. The Marina Manager gave tour along one of the pontoons which gave great views into the working sheds of various manufacturers as the sun was setting over the harbour.

Luerssen Yachts organised a great evening of entertainment in traditional German style. It started from the off, with the starter being brought to the tables with each person being presented a hard-boiled egg and a ‘Eierschalensollbruchstellenverursacher’ (Egg top opener in English), which was new to most people and a fun twist to opening a boiled egg.  After several steins (German beer mugs), the host introduced everyone to the final evening’s entertainment, the ‘Nagelbalken’ game, in which participants competed against each other to drive a nail into a beam of wood with as few strokes as possible.

Day 2 included a very interesting address on ‘The State of the Market’ from the Chairman & Editor of The Superyacht Group Martin Redmayne followed by an interactive debate with the audience and the expert panel with Ken Hickling, Malcolm Jacotine, John Leonida,  Alberto Perrone and Martin Redmayne.

This led to discussions later amongst the Divergent team about strategy and the market and what we could offer clients and manufacturers in the future to improve the industry.

The afternoon held a ‘speed dating approach’ of B2C scheduled business meetings where we met with suppliers in 15-minute intervals discussing our own objectives and listening to their sales pitches. It was a great opportunity to discover and build relationships with new companies and learn of new technologies in the superyacht industry.

The afternoon finished with the Passerelle Pitch where several companies were given 3 minutes to promote their business on stage meeting set criteria – new, unique and innovative. After each presentation the audience were required to vote for the best pitch.

Day 2 evening Gala Dinner was in the Grand Hotel Royal, a beautiful Art Nouveau style building, built in the early 20th Century, which hosted large pine gardens to the rear where we started the evening with canapes and bubbles. This was a beautiful setting to meet some of our new acquaintances made throughout the day and unwind after a very productive day. The evening’s entertainment sponsored by The lands of the Giacomo Puccini & Luccapromos included an ensemble with a singer which received a standing ovation.

The final day commenced with the last of the speed dating B2C Business meetings. After lunch we split into 2 groups to cover 4 discussion points which had been determined by a debate the previous day:

The Divergent team split into 2 to ensure we were present in all discussion groups to gain most from the conversations held within each subject matter. Both teams absorbed a lot of information from the discussions, which gave us food for thought for our own business and how we move forward in years to come.

All in all, Yare Networking was a fantastic superyacht networking event and we’re very glad we had a chance to visit it for the first time. It was a great opportunity for us to network with the shipyards, meet new industry contacts and suppliers and learn about the innovative superyacht technologies of the future.

We would like to thank all of the Yare Networking team in Italy for superb organisation, especially during these challenging times.

The post has been written by Ed Cherrett, a DPA and Yacht Manager of Divergent Yachting.